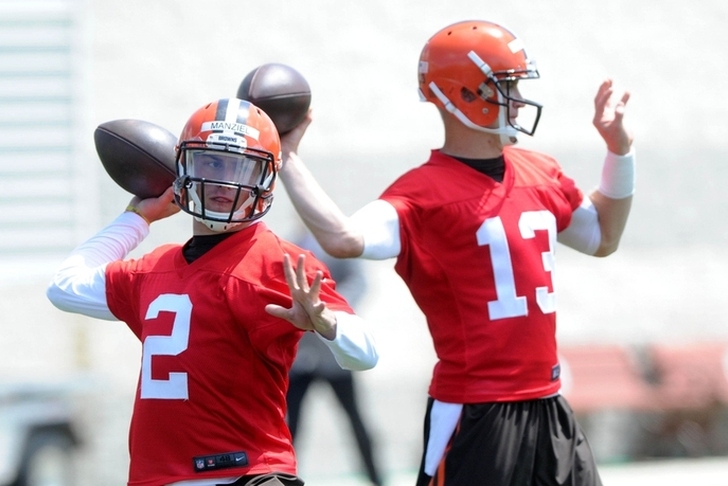 All 32 NFL teams head into training camp with playoff and Super Bowl aspirations. Only a select few will actually turn such aspirations into reality. The Browns aren't one of them. Here's 3 Reasons Why The Cleveland Browns Won't Make The Playoffs Next Season.

Yes, Cleveland fielded a top-ten defense last year. Yes, they loaded up in free agency and in the NFL Draft to tweak the depth chart in hopes of vaulting into the top five. But, the offense's hide-and-seek nature will once again overload the D with repeated snaps on short rest. The wear and tear showed itself late in Cleveland's late-season swoon last year. It doesn't look like it'll get much better in 2015.

Speaking of the offense...

Let's get this straight  -- Josh McCown's value as a starting quarterback is entirely based on a small sample size replacing an injured Jay Cutler for the Chicago Bears back in 2013. Other than that, he's been nothing more than a replacement-level QB at best. On the other hand, Johnny Manziel is a nice X-factor to have. But, he's not exactly reliable in any which way, shape or form both from an on-field and off-the-field standpoint.

The Pittsburgh Steelers and Baltimore Ravens are legit Super Bowl contenders locked and loaded with a wealth of talent on both sides of the ball -- Pittsburgh's defensive shakiness aside. Even the Cincinnati Bengals are just an Andy Dalton wakeup call from a deep January run. In short, the Browns will have to fend off all three of those teams for both an AFC North title and the conference's two Wild Card spots. There are too many question marks abound in Cleveland for that to happen.