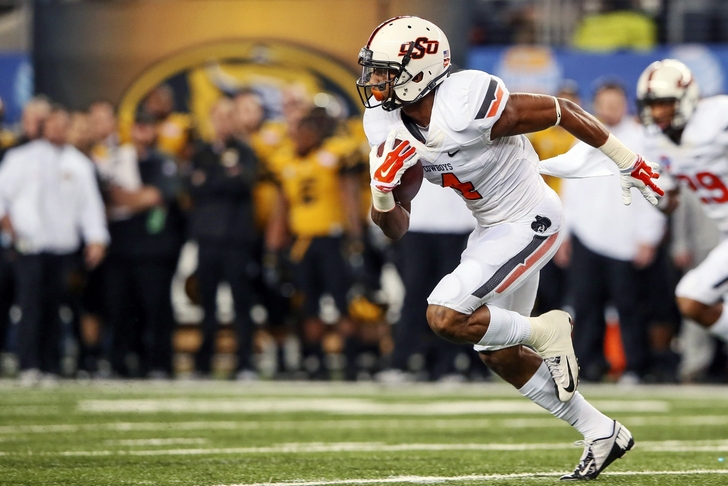 With the 8th overall pick in the 2014 NFL Draft, the Cleveland Browns have selected Justin Gilbert out of Oklahoma State.

Gilbert was both a quarterback and a defensive back in Texas prep school, along with playing both track and basketball. The Oklahoma State corner was a finalist for the Jim Thorpe Award in 2013, despite not starting against Kansas State (ejected the previous week) and Baylor (injured left shoulder). He posted 42 tackles in 2013 (seven for a loss), along with seven passes defensed and seven interceptions. He finished his collegiate career with eight non-offensive touchdowns, six of those on kickoff returns. He showcased his top-notch speed (4.37 seconds in the 40-yard-dash) and strength (lifting 225 pounds 20 times) at the NFL Combine -- raising his draft stock considerably.

Justin Gilbert is a natural athlete, combining impressive size, speed, and athleticism into an NFL-ready package at cornerback. He pops and swivels his hips with ease, displaying natural fluidity when making adjustments to the ball. Gilbert has excellent feet and is hard to shake when he is locked in. He has a receiver’s eye for the ball, closing in on throws without tipping his hand.

Check out Gilbert's highlight video for a closer look into what he brings to the Browns: