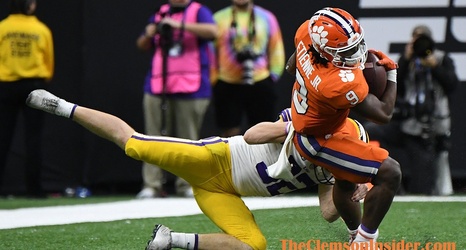 With the College Football Playoff National Championship Game in the books, Clemson running back Travis Etienne must focus on making his NFL decision ahead of next Monday’s deadline to declare for the draft.

As painful as Clemson’s 42-25 loss to LSU on Monday night was for Etienne, the junior says the game’s outcome does not affect his decision of whether to stick around for one more season with the Tigers or forgo his final year of eligibility and enter the next phase of his football career.

Etienne intends to make an informed choice after having conversations with his family as well as head coach Dabo Swinney and running backs coach Tony Elliott.