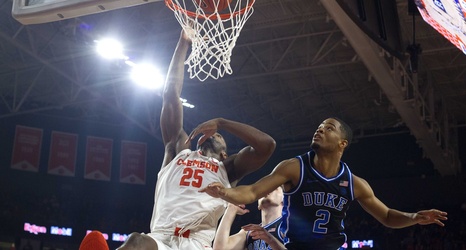 On Saturday, Clemson notched its first ever win over North Carolina in Chapel Hill. How do you follow that up? By beating the No. 3 team in the country.

That is what the Tigers did on Tuesday at Littlejohn as they won their third straight ACC game with a 79-72 victory over No. 3 Duke at Littlejohn Coliseum. It was Clemson’s first win over a top 5 Duke team since February 4, 2009.

It was Clemson’s first win over a top 3 team since beating No. 1 North Carolina in 2001.

Aamir Simms led the Tigers with 25 points, while Tevin Mack scored 22 points in the stunning victory.