Swinney says Carman anxious to prove himself against Chase Young 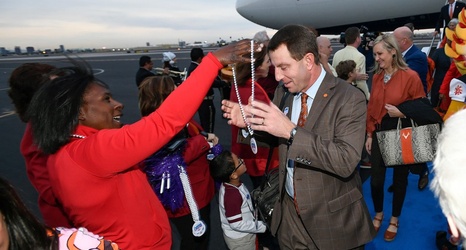 PHOENIX — When describing the level of excitement Clemson left tackle Jackson Carman has for playing in Saturday’s Fiesta Bowl against No. 2 Ohio State, Dabo Swinney said the Fairfield, Ohio native is “super excited.”

“It’s kind of neat experience when you go against your school … hometown school,” Swinney said after the Tigers’ arrived in Phoenix to play in the College Football Playoff Semifinal. “It’s a neat experience. I’ve experienced it in a different way as a coach, obviously going against Alabama. But I think at the end of the day, when the game kicks off, it’s just about the game.