Swinney on Clemson's first true road test: 'We better put it together' 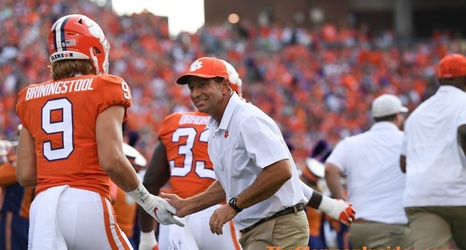 Dabo Swinney echoed the same positive sentiments his assistant coaches and players had earlier in the week when it comes to Clemson’s offense.

Speaking to the media for nearly 40 minutes during his weekly press conference Tuesday, Swinney voiced his own optimism about a unit that’s had its share of struggles through three games. The Tigers rank no better than 101st nationally in yards and points, and they haven’t done themselves any favors with sloppy ball security.

Fortunately for the Tigers, they’ve only lost two of their 11 fumbles, which Swinney called “a miracle.” And with No.