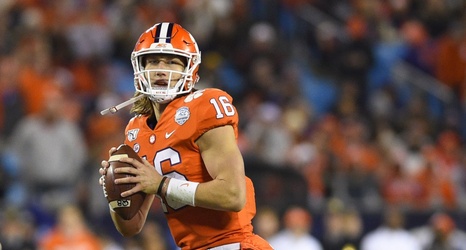 The sophomore quarterback threw for four touchdowns, an ACC Championship Game record, while leading the third-ranked Tigers to a 62-17 victory over No. 23 Virginia at Bank of America Stadium for their fifth straight conference title.

Lawrence was superbly sharp as he completed 16 of his 22 pass attempts for 302 yards, his second-highest tally of the season behind the 395 yards passing he had at Syracuse on Sept. 14. The Cartersville, Georgia native posted an efficiency rating of 248.

Tee Higgins hauled in three of Lawrence’s touchdown strikes, including a 19-yard catch-and-run on Clemson’s first possession of the game that gave the Tigers a 7-0 lead at the 11:11 mark of the first quarter.