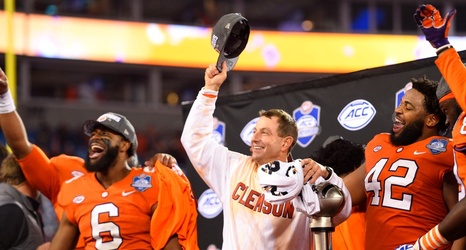 GREENSBORO, N.C. – The 2020 Atlantic Coast Conference Football Championship Game will be played Saturday, Dec. 19, at Bank of America Stadium in Charlotte, North Carolina. Game time will be announced no later than Dec. 7 and the game will be televised by either ABC or ESPN.

This year, the ACC Championship Game will feature the league’s top two teams based upon highest winning percentage in conference games. More information on the ACC’s tiebreaker procedures can be found here.

Capacity for the event will comply with North Carolina state and local regulations, which currently allows for seven percent capacity at outdoor venues of greater than 10,000 fans.