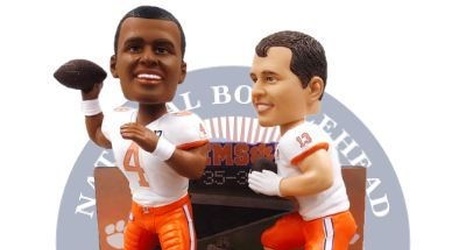 The bobbleheads are being produced exclusively for the National Bobblehead Hall of Fame and Museum by FOCO, an official licensee and manufacturer of Clemson and NCAA merchandise.

You can check it out below.

From our friends at the Bobblehead Hall of Fame and Museum:

“This dual bobblehead commemorates one of the biggest plays in Clemson history–the last second touchdown pass from Deshaun Watson to Hunter Renfrow in the College Football National Championship Game on January 9th, 2017.