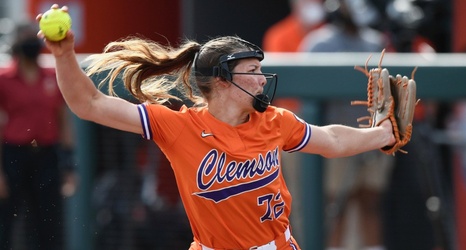 Clemson’s Valerie Cagle, who pitched two no-hitters last week, has been named the ACC’s Pitcher of the Week the conference announced on Tuesday.

The ACC softball weekly awards are voted on by a 20-member panel from both the teams and the conference office.

Cagle pitched two complete-game no-hitters to lead Clemson to a 6-0 week in the team’s pair of wins over Winthrop and its fifth ACC series sweep of the season against Boston College.

The second-year freshman from Yorktown, Va., went 4-0, did not surrender a run in 23 2/3 innings pitched and struck out 36 batters.