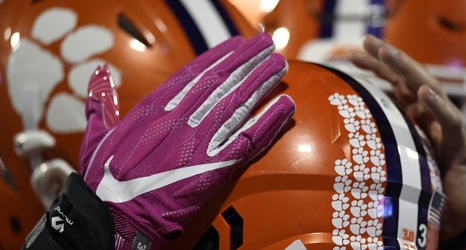 CLEMSON, SOUTH CAROLINA - OCTOBER 26: A detail view of pink glove worn for breast cancer awareness against the helmet of wide receiver Amari Rodgers #3 of the Clemson Tigers during the Tigers' football game against the Boston College Eagles at Memorial Stadium on October 26, 2019 in Clemson, South Carolina. (Photo by Mike Comer/Getty Images)

The Clemson football team received a message loud and clear from the CFB Playoff committee Tuesday evening when the first rankings were unveiled.

The first CFB Playoff rankings for the 2020 season were released Tuesday evening and the Clemson football team came in at No.