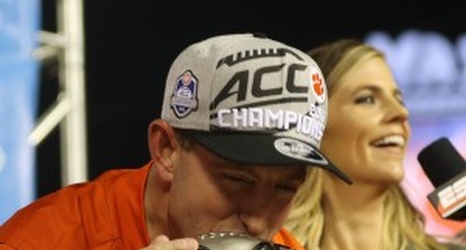 Top-ranked Clemson flexed its muscles at Georgia Tech with a dominant first half that gave it a 45-7 lead heading into the break.

The Tigers dominated on the field and on paper in the first half. They racked up 473 yards of total offense and held the Yellow Jackets to 104 yards in the half.

Trevor Lawrence put on a clinic in the first half, despite throwing his first interception in 367 attempts. He completed 22-of-27 passes for 391 yards and five touchdowns in two quarters.

Amari Rodgers led all Tiger receivers with six receptions for 161 yards and two touchdowns, including the 83-yard bomb from Lawrence.