Buckeyes reporter comes out swinging, but Swinney punches back 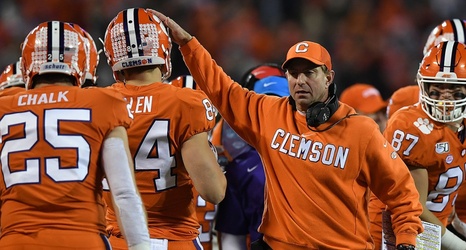 Dabo Swinney was barely a few minutes into the Fiesta Bowl teleconference on Sunday before he had to defend third-ranked Clemson’s schedule and the ACC, again.

An Ohio reporter, who covers No. 2 Ohio State, asked, “You’ve been so dominant in the ACC this year. This question is about what Ohio State had to face, what happens when you’re in a close game? What would you say about that? And people have criticized the ACC this year. What would you say about that? How strong is the league?”

Swinney chuckled a little before he responded.

“Well, we did have one close game against North Carolina and had to battle ourselves off to find a way to win.