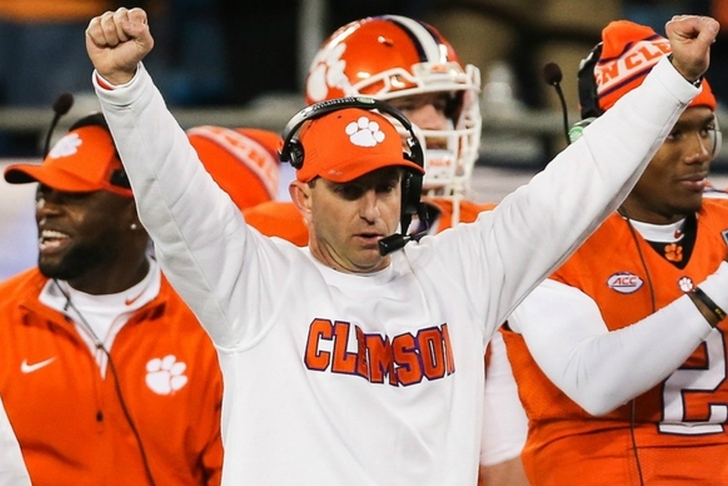 There's less than one month until National Signing Day on February 3rd, which means coaches around college football are gearing up for the final push in recruiting. Dabo Swinney and the Clemson Tigers are focused on their upcoming national championship game, but they haven't forgotten about recruiting. Here's our Clemson Football Recruiting News And Rumors Roundup With Less Than One Month Until Signing Day:

Where The Class Stands
Signing Day isn't here yet, but Clemson is in great position to secure a top-flight class. The Tigers are No. 5 in Rivals.com's rankings with only 16 players, thanks to two 5-star and nine 4-star recruits. Both 5-stars play on the defensive side of the ball. The first is DT Dexter Lawrence, the No. 2 player in the nation and the No. 1 player from North Carolina. The second is LB Rahshaun Smith. He's the No. 11 player and the second-best LB.

Alabama Wanted Watson
We're taking a little flashback Friday here, to the recruitment for star QB Deshaun Watson. Clemson landed him and the Tigers are glad they have one of the best QBs in college football. It turns out that Alabama wanted Watson bad. But Clemson, the first team to offer Watson when he was just a freshman in high school, landed the QB. Now, Watson is leading the Tigers against the team that wanted to desperately land him.

2017 CB Has Clemson No. 1
Clemson, like most programs, is already recruiting for 2017. That includes 4-star CB Deon Jones, who told 247Sports he has Clemson No. 1 on his list. The biggest reason is that Clemson offered Jones first.

"That's the main reason they lead," Jones said. "I've build a good relationship with him since my freshman year and it's lasted. It's still strong as of right now."

It sounds like Clemson is giving Jones the Watson treatment. Jones is the No. 8 CB for 2017. Florida is second on his list.