#6 Clemson vs. Miami: 3 Things We Learned From Both Teams 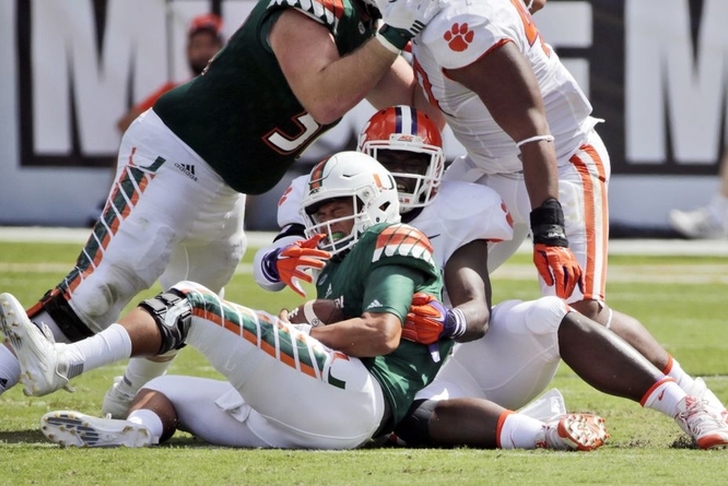 The #6 Clemson Tigers are a legit national title contender. The Miami Hurricanes are a mess. Clemson put an epic beatdown on Miami, running through the Canes in a 58-0 blowout win. Here's three things we learned from both teams on Saturday.

Wayne Gallman led the charge for Clemson with 118 rushing yards and a touchdown. He was the X-factor for the Tigers as they scored five touchdowns on their first six drives. Things went so well that QB Deshaun Watson was able to sit most of the second half.

The Clemson Tigers are taking care of business when they're supposed to. In fact they've been doing it for years. This is the 35th-straight win for the Tigers against unranked opponents.

If things fall right, this is the kind of victory which could propel Clemson from #6 into the Top Five or higher. It was a complete dismantling of a talented Miami team.

QB Brad Kaaya was knocked out in the second quarter with what appeared to be a concussion. No word on his forthcoming status has been given as of this writing.

"Fire Golden" chants broke out amongst the spare home crowd as early as the first quarter on Saturday. It appears it's not a matter of if Al Golden will get fired, but when.

There are absolutely no moral victories to be gleaned from this game for the Canes. They were outgained 567-146, picking up just six first downs to Miami's 33.