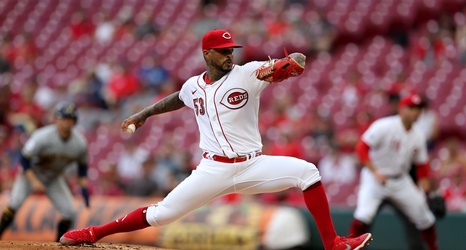 Vladimir Gutierrez pitched a career-high seven innings in his third Major League start, received a standing ovation as he walked off the mound and had all his teammates line up in the dugout to give him high-fives afterward.

The one moment where he couldn’t stop smiling?

Gutierrez recorded his first big-league hit in the second inning, an infield single to shortstop that bounced over the head of a third baseman who was drawn onto the infield grass.

On the same day Sonny Gray was placed on the 10-day injured list, Vladimir Gutierrez provided a boost to the rotation with an impressive start to lead the Cincinnati Reds to a 7-3 victory against the Milwaukee Brewers on Wednesday at Great American Ball Park.