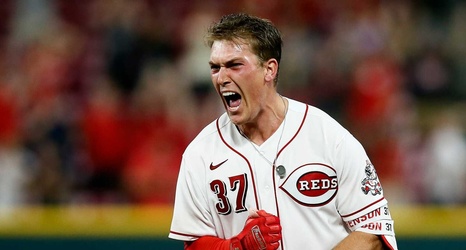 MILWAUKEE, WISCONSIN - JULY 11: Eugenio Suarez #7 of the Cincinnati Reds reacts after being hit by a pitch as Omar Narvaez #10 steps in front of him against the Milwaukee Brewers at American Family Field on July 11, 2021 in Milwaukee, Wisconsin. Reds defeated the Brewers 3-1. (Photo by John Fisher/Getty Images)

The scorching-hot Reds welcome the Brewers to town.

A July series doesn’t get much bigger than the three-game showdown this weekend between the two best teams in the National League Central. After taking three of four last weekend in Milwaukee, the Cincinnati Reds (48-42) now place host to the first place Brewers with four games separating the two for division supremacy.