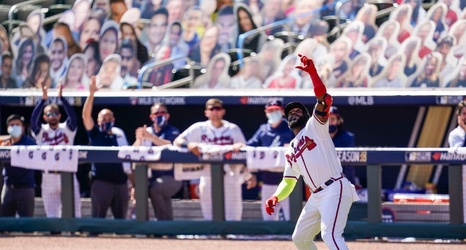 ESPN's broadcast team had a lengthy discussion during the Cincinnati Reds' nightmarish 8th inning of Thursday's Game 2 against the Atlanta Braves about Marcell Ozuna's reaction - acting like he was taking a selfie - before he rounded first base after hitting his two-run homer that extended his team's lead from 1-0 to 3-0 in an eventual 5-0 win to advance in the MLB postseason.

Here's what Matt Vasgersian, Alex Rodriguez and Buster Olney had to say about Ozuna's selfie: