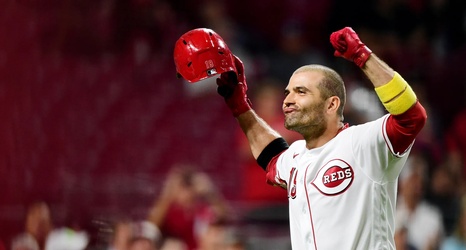 Joey Votto homered late in Sunday’s loss to the Los Angeles Dodgers, doing so after getting most of the afternoon off. Roll that into his outing on Monday and, well, it’s apparent there’s still ample bang in the Cincinnati Reds Hall of Fame 1B.

Joe Nuxhall Memorial Honorary Star of the Game Votto blasted another pair of dingers in Monday night’s series opener against the Pittsburgh Pirates, helping the Reds dig out of an early 5-0 deficit to scratch out a 9-5 win over their division rival.

I’d call it a ‘must-needed’ win, but since the St.