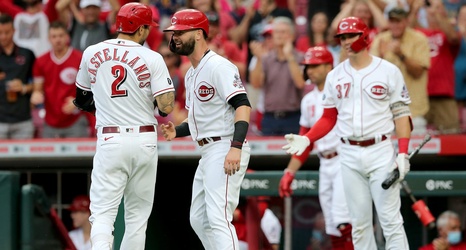 Joey Votto usually isn’t a player who shows a ton of emotion after a home run, but here he was letting all the excitement out.

Votto lifted a three-run homer to left field in the Cincinnati Reds’ 11-5 rout over the Colorado Rockies and he let everyone in Great American Ball Park know how he felt. He touched home plate, took off his helmet and shouted before high fiving his teammates.

Watching an animated Votto bob his head as walked toward the dugout, the crowd of 20,505 – the largest home crowd of the season – roared nearly as loud as it did during the homer.