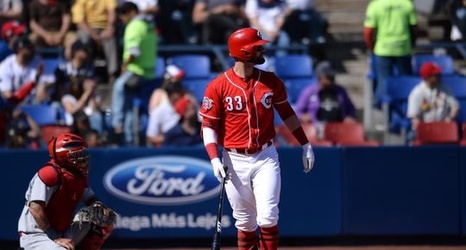 MONTERREY, Mexico – When the Reds took batting practice for the first time at Estadio de Béisbol Monterrey, there was an expectation that it would be a hitter-friendly park. Hitters had an advantage with the artificial turf and the thin air, playing at a higher altitude than any Major League stadium except Coors Field in Denver.

After a pitchers’ duel throughout most of Saturday’s Mexico Series opener, the Reds couldn’t keep up with the St. Louis Cardinals in Sunday’s slugfest that produced a combined six homers. The Reds lost, 9-5, snapping their four-game winning streak.

The Cardinals (9-6) pulled away with a five-run seventh inning against the Reds' bullpen, a rally that started with a pair of solo home runs.