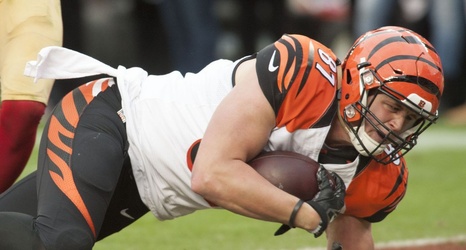 The Bengals saw both Tyler Kroft and Shawn Williams leave practice early on Tuesday. Kroft’s injury looks more significant after he had to be carted out of practice.

The Bengals are enduring their own version of the Terrible, Horrible, No Good, Very Bad Day.

William Jackson III was lost to a potentially season-ending injury, while Darqueze Dennard is out with an ankle injury, the severity of which being hopefully minor.

Now, Tyler Kroft has suffered an apparent knee injury that forced him to be carted out of practice. According to reporters on the scene, Kroft appeared to jam his knee, went down in pain and was able to get up and walk to the cart.