Joe Burrow: ‘I wasn’t coming out’ after rough 4th quarter hit to knee 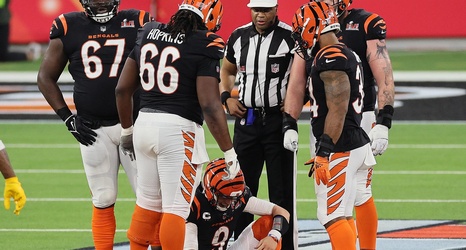 Joe Burrow managed to survive the entire 21-game slate behind the Cincinnati Bengals’ offensive line. He nearly didn’t towards the end of the Super Bowl.

With just under 12 minutes remaining in the season, Burrow was sacked for the seventh and final time of the night, which tied the Super Bowl record by the way. Von Miller met him in the pocket and the All-Pro edge rusher pulled him to the ground as fellow linebacker Justin Hollins piled on Burrow from another angle. This caused Burrow’s right knee to twist as he was taken down, and Burrow took a minute to get up off the field.