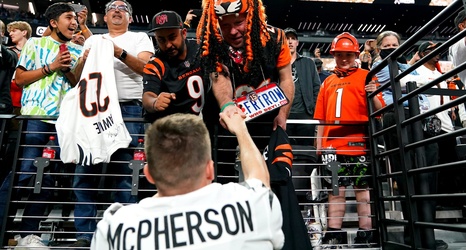 About an hour before the Cincinnati Bengals game against the Las Vegas Raiders started on Sunday, kicker Evan McPherson was going through his pregame warmup routine. On one of his attempts, McPherson went through his normal approach and planted his foot to kick.

The grass shifted underneath McPherson’s feet, and he lost his footing and stumbled off-balanced.

After that kick, McPherson told himself that he needed to slow down his approach and “scoot up” to the kick. The grass at Allegiant Stadium was torn up like an unmaintained golf course, so McPherson couldn’t use the same pre-kick technique that he had used on turf all season.