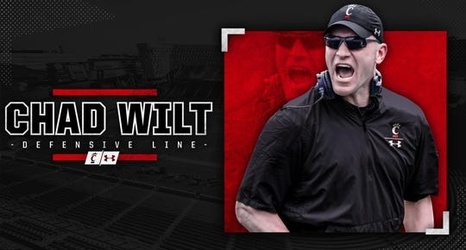 Update: University of Cincinnati defensive line coach Chad Wilt is headed to the University of Minnesota after one season on Luke Fickell's staff, a source confirmed to The Enquirer.

Original story: Cincinnati Bearcats defensive line coach Chad Wilt is leaving Luke Fickell's staff after one season at UC for a position at Minnesota, according to a report via Twitter on Wednesday night from Yahoo Sports' Pete Thamel.

Wilt joined the Bearcats last February after three seasons at Army. Before that, he coached at Maryland, Ball State, Richmond, Virginia, Liberty and Central Connecticut State.