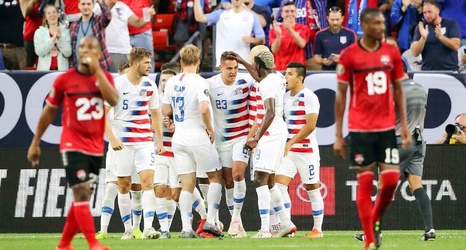 After a meandering first 45 minutes, the United States made it two wins from two in the Gold Cup group stage, defeating Trinidad and Tobago 6-0 on Saturday night in Cleveland.

It had been 620 days since the U.S. was denied a place at the 2018 World Cup by Trinidad, when the Americans were defeated 2-1 on the final day of qualifying for the competition. U.S. players this week played down the notion that they'd be seeking revenge for that loss, but their victory was physical throughout and occasionally tempers flared.

Zack Steffen was the first goalkeeper to be seriously tested, when he was forced to punch away a rasping drive from Khaleem Hyland nine minutes into the contest.