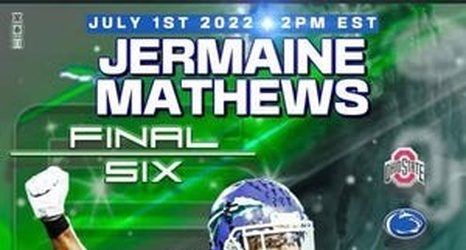 A little over a week after posting his Top 6 and then receiving another offer from Alabama, Winton Woods rising senior defensive back Jermaine Mathews Jr. has selected a cap.

As "crystal-balled" by several recruiting services, Mathews will be an Ohio State Buckeye. Locally he joins Malik Hartford of Lakota West and offensive lineman Austin Siereveld of Lakota East in the Buckeye fold.

Mathews, a 6-foot, 175-pound defensive back was considered a four-star recruit by 247Sports.com. On June 22 he had narrowed his choices to Ohio State, Cincinnati, Penn State, Oklahoma, Jackson State and LSU.