Due to attendance limits, Army-Navy game moved from Philadelphia to West Point 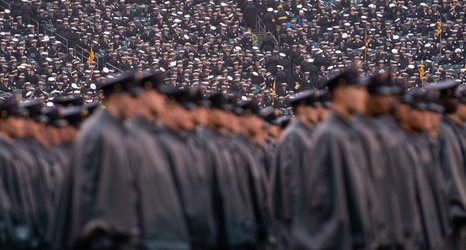 For the first time since 1943, one of college football's most iconic rivalries will be played on a school's campus.

The Army Black Knights and Navy Midshipmen will play its game at the U.S. Military Academy's West Point, New York campus on Dec. 12, both schools' athletic directors said in a release Friday.

Lincoln Financial Field, home of the Philadelphia Eagles, had been scheduled to host the contest, but the schools are adjusting "due to attendance limits placed on outdoor events in the state of Pennsylvania that would not allow the entire Corps of Cadets and Brigade of Midshipmen to attend.