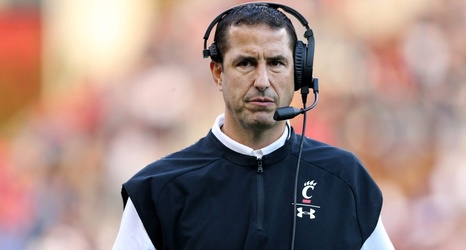 University of Cincinnati head football coach Luke Fickell said he isn't taking any calls about the vacancy at the University of Southern California or any other job openings.

After USC on Monday fired its football coach, Clay Helton, two days after the Trojans' 42-28 home defeat to Stanford, reports linking Fickell to the job began to surface.

FIckell on Tuesday emphatically shooed away the USC noise, saying he knows nothing about the job and has no interest in taking any phone calls from Trojans Director of Athletics Mike Bohn.

"Look, I don't talk to anybody.