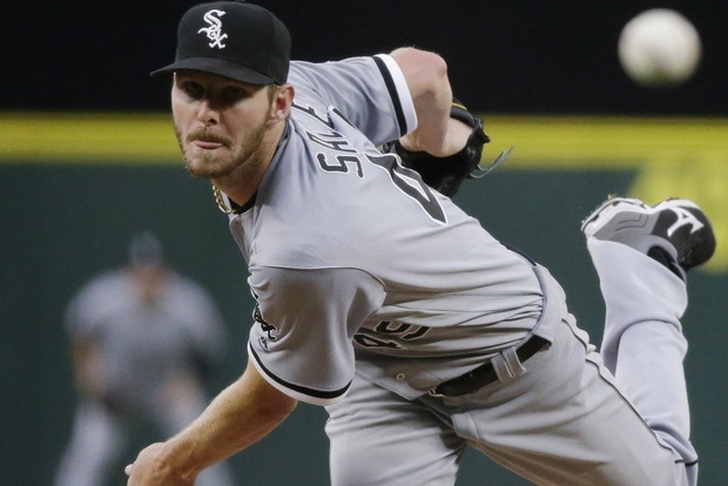 The MLB trade deadline of August 1st is rapidly approaching, and the trade rumors around the Chicago White Sox are starting to heat up. The White Sox are 47-50 and have gone from Wild Card contender to the fifth-worst record in the AL. That makes the White Sox likely sellers at the deadline. With that in mind, here all the latest White Sox trade rumors you need to know.

Sale will miss the next five days, meaning at least one start. For those that didn't hear what happened, Sale was unhappy about having to wear the White Sox's throw back jerseys during his start. So, he went Edward Scissorhands on the unis. Seriously.

Not a joke: Source says Sale blowup was because he didn't want to wear throwbacks, so he cut the jerseys up so no one could wear them.

Sale's outburst isn't expected to impact his trade value, although the White Sox are shopping him.

Will Sale Be Dealt?
Sale, unsurprisingly, has generated plenty of interest. His outburst was not an attempt to get out of Chicago, and it shouldn't hurt his trade value, Jon Heyman reports.

Despite his attention-grabbing reaction, and the whole dispute, word is that he is fine with staying on the South Side. "Fine either way," was the phrase heard. Apparently, he just wants to win. Word, too, is that while the Sox obviously don’t condone his clear over-reaction, there is no belief they will lower their asking price, which was first reported here to be five top prospects. In other words, there is no evidence they are any more interested in trading him than before.

The White Sox are asking a lot for Sale, as they should. If they get a monster deal, they might pull the trigger. If not, they'll keep him.

Chicago Open To Moving Jose Quintana?
Much like Sale, the White Sox are just going to give away the 27-year-old Quintana. However, Nick Cafardo of the Boston Globe reports Quintana can be had for the right price.

OK, we’ve heard White Sox GM Rick Hahn say he’s not trading members of his rotation, but Quintana, according to one major source, could be had for an “overwhelming” package.

With Quintana under team control through 2020, the White Sox will expect a massive return.

Todd Frazier On The Block?
The White Sox have hit a rough patch and that's led them to put almost all position players (not pitchers, see above) on the trading block, per Cafardo.

Since the White Sox are open for business for all position players not named Tim Anderson, Frazier has emerged as a major power piece. The Mets would be an ideal landing spot, but they are reluctant to deal prospects. There was some belief the Mets should have pursued Frazier in the offseason, but they declined.

The White Sox traded with the Reds for Frazier this offseason. He has only two more years of team control left, but he's one of the better third basemen in the game.