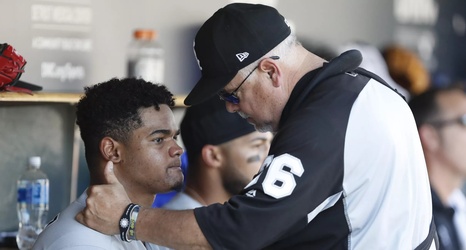 Let’s tip this sad game story off with a comparison of two current Chicago White Sox starters. Can you tell who’s who?

Pretty similar, huh? W-L, starts, innings, earned runs, WHIP all dead on. This terrible Player A had a lot more trouble with control, Player B with hits ... but in the end, put similar numbers of baserunners on. You might give the advantage to Player B, because despite more contact, fewer baserunners scored on him; a 5.57 ERA is howlingly bad, but 6.13 is otherworldly for a 32-start season.