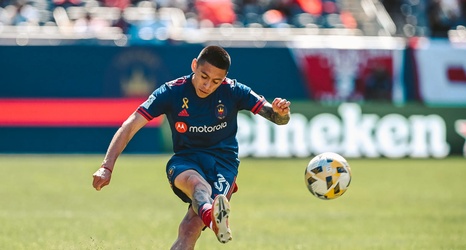 In the last two seasons back at Soldier Field, the Chicago Fire have gotten used to playing on choppy grass surfaces in the fall. But Saturday’s college football game between Wisconsin and Notre Dame left the pitch in horrible shape, so much so that neither the Fire nor Nashville SC could play one or two touch soccer—with even the simplest passes bouncing and skipping at odd angles during the 0-0 draw. After most Bears games, pockmarks are usually worst between the hashmarks, but on Sunday they were all over the field, with buckets of green paint used to cover up the gridiron markings and logos.