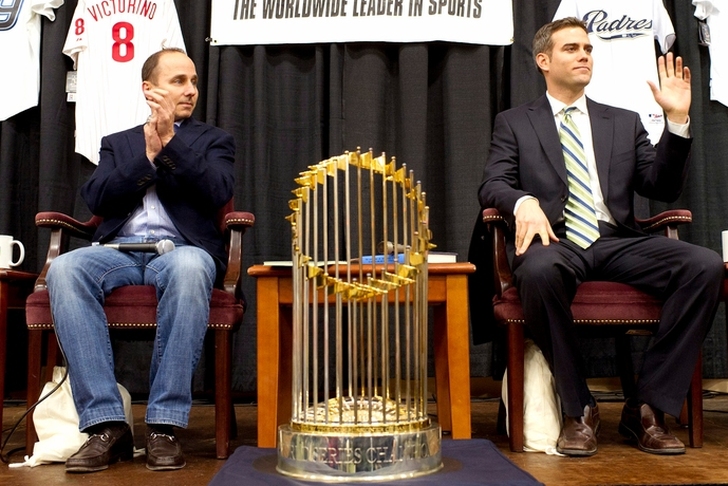 The New York Yankees appear set on trotting out the back-of-the-bullpen ace trio of Dellin Betances, Andrew Miller and the recently acquired Aroldis Chapman in 2016, but what happens if the team's obvious need for starting pitching and aging core of position players causes struggles out of the gate?

Andrew Miller, likely slotted for the eighth inning role going forward in the Bronx, has been dangled in trade talks off and on for a good portion of the offseason. One rumor now being floated is that the team could have a willing suiter for Miller in the Chicago Cubs if they start picking up the phone again.

Via Randy Levine of CBS Chicago:

"For now, the Yankees say they aren’t trading the 30-year-old Miller. Take that for what you think it’s worth, as Miller was being talked about as a trading chip long before the Chapman deal was completed. The Cubs have right-hander Hector Rondon as their closer but are still open to adding a big bullpen arm during the season, as manager Joe Maddon often aggressively utilizes his relievers.

"The Yankees are short on starting pitching. In a potential deal, they’d likely ask for a quality young rotation pitcher or a power bat in return for a bullpen stud. The Cubs may not have the pitching to match up, but aging Yankees sluggers such as Alex Rodriguez, Carlos Beltran and Mark Teixeira are going into the final stages of their careers. A big bat from the Cubs such as Jorge Soler or Javier Baez may interest Yankees general manager Brian Cashman as spring training and the season progresses."

According to multiple reports out of Chicago, the Cubs are much more likely to part with Soler as the centerpiece of a trade than Baez. Baez has been ticketed as a core outfield/middle infield option with Ben Zobrist in the mix, while Soler could be an expendable piece in the outfield with the current construction of the depth chart at Wrigley.

As for Miller, he converted 36 of 38 save opportunities after signing a four-year, $36-million contract with the Yankees last December. Posting a 2.04 ERA and 0.86 WHIP while 100 strikeouts in 61 2/3 innings last season, Miller projects to be a primary contender for best setup man in the business in 2015 (and a lefty to boot) and a valuable trade chip for closer-hungry teams as the months progress.