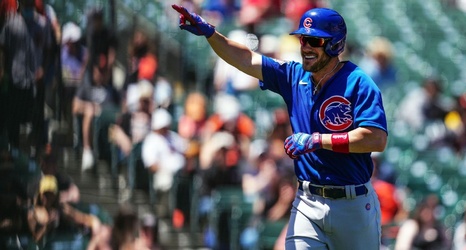 CHICAGO -- He's the backup to the backup, but Chicago Cubs third baseman Patrick Wisdom sure isn't playing like it. As the 29-year-old rookie preps for Sunday Night Baseball -- against the team that drafted him -- Wisdom has already accomplished more than most.

In his first 10 starts as a Cub, Wisdom hit eight home runs, tying Aristides Aquino for the most by any player in his first 10 games with a team since 1900.

He has lit the league -- and opposing pitchers -- on fire.

"The guy has seven pumps already and he hasn't been here that long," teammate Ian Happ said before Wisdom hit home run No.