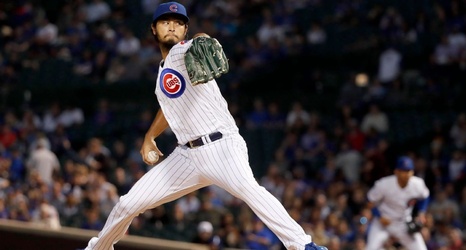 CHICAGO -- Chicago Cubs pitcher Yu Darvish struck out eight straight batters during Tuesday night's game against the Cincinnati Reds to set a franchise record for most consecutive strikeouts within a single game.

Darvish accomplished the feat between the second and fourth innings, compiling 11 strikeouts overall in his first four innings.

Kyle Farnsworth, Kerry Wood and Juan Cruz also racked up eight consecutive strikeouts as Cubs pitchers, but they did so over multiple games.

Darvish whiffed the last two Reds in the second inning, then went on to strike out the side in the third and fourth innings, before Jose Peraza ended the streak when he lined out to lead off the fifth.