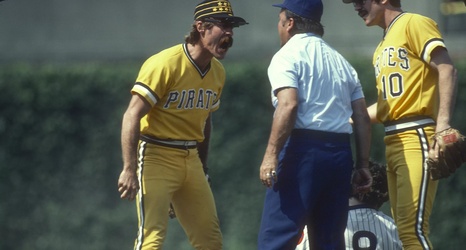 Those all-yellow Pirates uniforms of the late 1970s and early 1980s were really something, weren’t they? Dave Parker, a Pirates star then, famously said he thought they made him look like a giant canary.

Anyway, the caption that comes with this photo via Getty Images reads:

Phil Garner #3 of the Pittsburgh Pirates argues with an umpire during a Major League Baseball game against the Chicago Cubs circa 1979 at Wrigley Field in Chicago, Illinois. Garner played for the Pirates from 1977-81.

Garner later became a major-league manager, with the Brewers, Tigers and Astros, from 1992-2007.