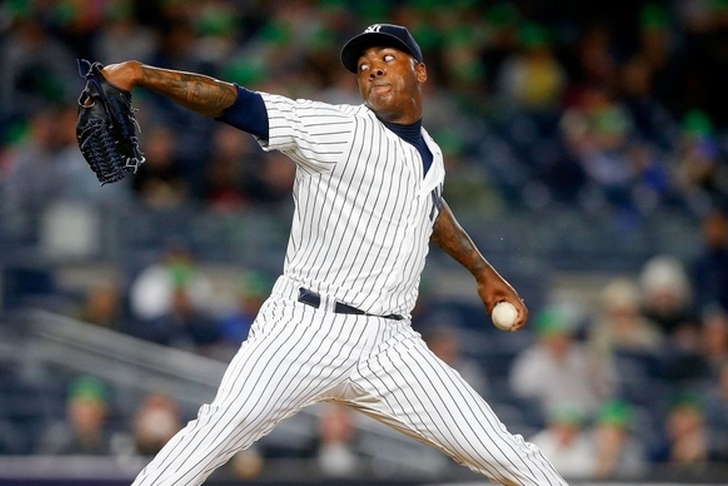 As we get closer to the All-Star break, the Cubs are a commanding nine games ahead of the St. Louis Cardinals in the National League Central. Even though the Cubs hold the best record in baseball with a .627 winning percentage, there is still a lot of baseball left to be played and still room for the Cubs to improve. Chicago seems like they will cruise to finish atop the NL Central, but beware that October baseball is an entirely different ball game than the regular season.

Here's the latest Chicago Cubs Trade Rumors as we head toward the trade deadline:

Cubs rumored to be considering LHP Rich Hill
Rich Hill made his first start since May 29 against Pittsburgh and held the Pirates to two earned runs in six innings, allowing just four hits while striking out six. Hill would be an ideal replacement for Jason Hammel, who is coming off his worst start of the season and has a track record of being garbage after the All-Star break.

How does Oakland benefit?
Billy McKinney and Dan Vogelbach are two names that come to mind as trade options for the Cubs. Neither player has any chance of seeing regular playing time in Chicago, so  the transaction would benefit both sides of the deal.

Oakland should be familiar with McKinney given the fact that the A's drafted him 24th overall in 2013. He was later traded to the Cubs along with Addison Russell and Dan Straily in exchange for Jeff Samardzija. McKinney would be a compatible fit in left field as he is a consistent hitter, but lacks power.

McKinney's lack of power, though, can be made up by none other than Dan Vogelbach. Who? Vogelbach is currently displaying his ability to hit the long ball in the Minor Leagues. Simply put, power isn't a problem for this guy. Vogelbach would best fit as a full-time designated hitter but has experience at first base, making 70 appearances there for the Iowa Cubs.

Can Chicago make it to the world series with their current bullpen?
Eh, probably not. If the Cubs decide to keep the starting rotation as is, Chicago can improve their postseason odds by bulking up the bullpen. Adding depth to the rotation is ideal for any team looking to make a run in October. Chicago can and should acquire one, if not two arms in the 'pen to help them solidify a shot at a world series title.

Can Aroldis Chapman fit in with Midwestern charm?
Chatter around the league is that Chicago is interested in trading for Yankee reliever Aroldis Chapman.  This transaction would make an already solid Cubs bullpen lethal. You know what else is lethal, Aroldis Chapman's good judgment.The Yankees obtained Chapman in the offseason from the Reds, but the hard-throwing southpaw was suspended for the first month of the season after he was charged with domestic abuse. I'm not sure if he would be a good fit for Midwestern hospitality.

Cubs showing serious interest in LHP Andrew Miller?
According to Bruce Levine of CBS Chicago they are. Back when Theo Epstein ran the operations for Boston, the Red Sox traded for Andrew Miller. Since Epstein's move to Chicago, Miller now pitches for the Yankees, and has turned into a reliable lefty reliever. The Bronx Bombers entered Sunday two games under .500, and have the potential to make a run at the American League East or a Wild Card slot. There are a lot of clubs who would love to have another left-hander in the bullpen, but the growing chance of New York making it to postseason will make Miller too valuable to give away. Miller has 43 saves during his season and a half as a Yankee, so his dominance as a reliever goes without saying.