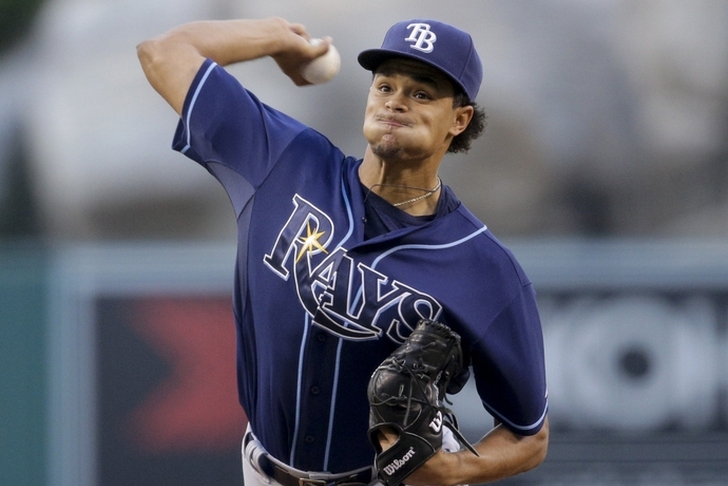 The MLB trade deadline is just a few hours away and the Chicago Cubs trade rumors are starting to heat up on the hot stove. The Cubs are 63-41 and lead the NL Central. They've already pulled off the biggest trade so far this season, landing Aroldis Chapman from the Yankees. However, the Cubs could look to make another deal or two before the deadline. With that in mind, here all the latest Cubs trade rumors.

Cubs Looking For Another Starter, LF?
The Cubs already landed Chapman, but are also looking at upgrades in the outfield and in the starting rotation.

#Cubs continue to look for controllable SP, remain determined not to overpay for LHH LFer. Soler (RHH) expected back soon.

A potential OF target was Josh Reddick, but the Dodgers have landed him in a blockbuster trade. As for a starter, there's one team the Cubs are talking with.

Cubs And Rays?
That team is the Tampa Bay Rays. With multiple young pitchers under team control for several years, they're a logical trade partner.

Cubs still trying hard for a pitcher. Tampa Bay has been on and off having numerous talks with teams including Chicago .

The Tampa Bay Times reports the Cubs scouted the Rays over the weekend. Matt Moore (who is getting plenty of interest from the Giants), Chris Archer and Jake Odorizzi are the top three trade options. However, their price will be high.

Cubs Were "Mystery Team" In Lucroy Talks?
One of the go-to buzzwords in the any MLB trade rumor is the "mystery team." The Cubs were at least one such team in those talks.

cubs were one "mystery team" in on lucroy. talk never went far because cubs saw an "in division tax" in asking price.

Lucroy would be an upgrade behind the plate over Miguel Montero and David Ross. Montero is hitting just .194, with Ross only slightly better at .231. The Brewers had agreed to a deal with the Indians, but Lucroy vetoed that with his no-trade clause, so he's still on the trade block.

Joe Smith An Option?
The Cubs might not be done looking for bullpen help either, as they're discussing a deal for the Angels' Joe Smith.

Source: #Cubs discussing a trade for #Angels’ Joe Smith. Considering number of other possibilities as well.

It's not clear what the Angels want in exchange for Smith. He's a quality, although unspectacular bullpen arm.