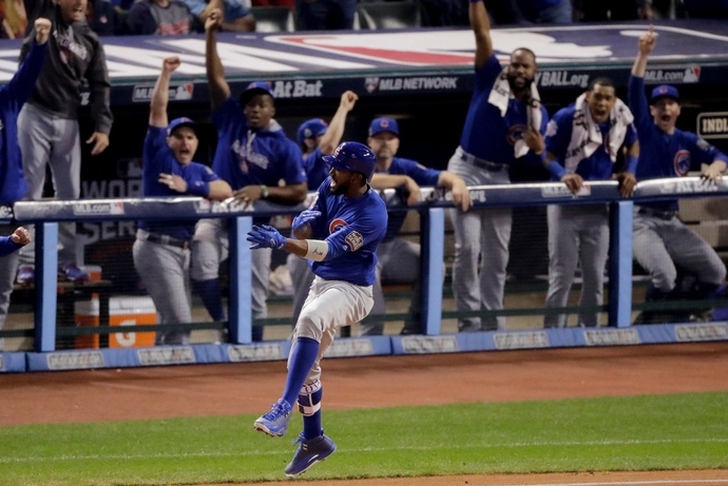 They've done it. The Chicago Cubs have ended the drought and broken the curse, winning the franchise's first World Series title since 1908 with a thrilling 8-7 win over the Cleveland Indians.

It was a game that will immediately go down as a classic. Anything and everything that could happen in a game did happen - including 17-minute rain delay in extra innings - but in the end, the Cubs conquered it all to win the championship.

Early in the game, it was all Chicago. Dexter Fowler got things started with a resounding statement in the form of a leadoff homer in the top of the 1st inning. That was the first leadoff home run in Game 7 in World Series history, and certainly set the tone for the next few innings for Chicago. Even when the Indians tied the game with a RBI single from Carlos Santana in the 3rd, the Cubs responded quickly, re-taking the lead with two runs in the top of the 4th inning.

Then, Chicago appeared ready to break the game open when Javier Baez took the first pitch of the 5th inning and sent it over the fence in right-centerfield:

The Cubs scored again in the inning when a double from Anthony Rizzo drove in Kris Bryant, giving them a 5-1 lead.

Just when Chicago was starting to get comfortable, Jon Lester - who had just come on in relief of starter Kyle Hendricks - threw a wild pitch that ended up scoring two runs for the Indians, cutting their deficit to 5-3.

We had a ballgame again. Or at least appeared to, until David Ross stepped to the plate. The 39-year-old catcher was playing in his final MLB game before retirement and had just come into the game to catch for Lester, yet still blasted a solo homer to straightaway centerfield.

Ross is now the oldest player to ever hit a home run in a World Series game.

But Cleveland was not done. With their season on the line, the Indians rallied in the bottom of the eighth as Brandon Guyer hit a RBI double that made it 6-4, and then with dominant closer Aroldis Chapman on the mound, Rajai Davis saw a pitch he liked and blasted it over the fence to tie the game.

That was the first game-tying home run hit in the 8th inning or later in Game 7 in World Series history, and the first time a team had come back from four runs or more to tie the game or take the lead. With neither team scoring in the ninth, the game went into extra innings - when we had a rain delay.

That rain delay seem to halt any momentum the Indians had, and allowed the Cubs to catch their collective breath. That allowed them to regain the lead in the top of the 10th with an avalanche of hits, including RBIs from Ben Zobrist and Miguel Montero:

Those were the runs that iced it, making history for the Cubs. Cleveland managed to get a baserunner on with two outs when reliever Carl Edwards Jr. walked Guyer, but Michael Martinez grounded out to end the game.

Fowler led the way for Chicago's offense, going 3-4 from the plate with that solo homer. Kyle Schwarber also went 3-5 and stole a base, while Bryant went 1-4 with two runs scored. Eight different players drove in a run for Chicago, showing the balance of their lineup.

The Cubs also got great outings from the first two pitchers that took the mound. Hendricks gave up just four hits and one run in 4.2 innings, Lester allowed two hits (and those two runs on the wild pitch) in 3.0 innings of work. Then Chapman took over, but gave up three runs in the 8th before getting through the 9th without any more damage. He ended up getting the win with Edwards and Mike Montgomery closing things out in the 10th.

Cleveland did not get the pitching they expected from their big names, but found enough offense to match it. Corey Kluber, who had picked up wins in Games 1 and 4, allowed four runs and six hits in just four innings. Then, the usually-reliable Andrew Miller came out of the bullpen, but he gave up two runs and four hits in 2.1 innings of work. Closer Cody Allen came on and pitched two no-hit innings to force extras, then Brian Shaw allowed both runs in the 10th.

Davis was the obvious star for the Indians with that two-run homer, but Guyer also came off the bench to play well, going 2-2 with that RBI double.