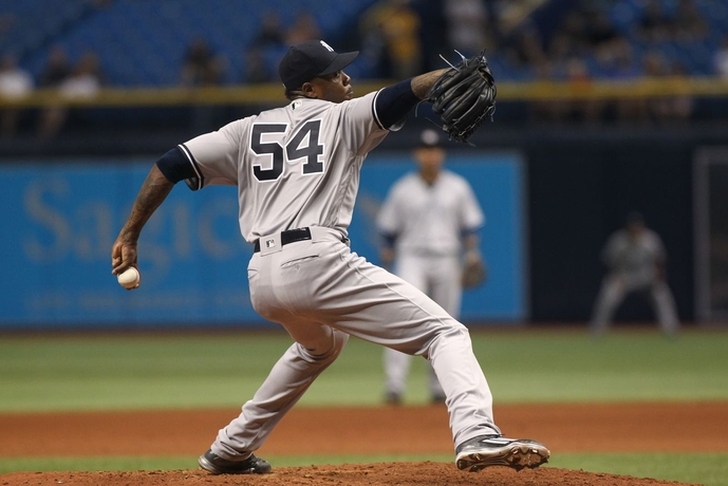 The MLB trade deadline of August 1st is rapidly approaching, and the trade rumors around the Chicago Cubs are starting to heat up. The Cubs are 57-37, and although they lead the NL Central, they've regressed a bit in recent weeks. One thing is for sure though - the Cubs will be buyers at the trade deadline. With that in mind, here all the latest Cubs trade rumors.

Cubs interested in Chapman, Miller
Chicago's biggest priority this offseason is to upgrade their bullpen, and that has them talking to the Yankees about Aroldis Chapman and Andrew Miller, reports ESPN's Jerry Crasnick:

#SFGiants also scouting #Brewers Will Smith and Jeremy Jeffress. Lingering on Miller-Chapman, but might be outgunned by #Cubs, #Nationals.

The two sides have been engaged in talks throughout various points of the past month, but they haven't fully developed. New York is insistent that slugger Kyle Schwarber be included in a deal, but the Cubs are adamant in their desire to keep him.

Chapman has a 2.22 ERA with 19 saves in 29 appearances this season, while Miller has a 1.31 ERA with seven saves and 70 strikeouts this season.

Chicago interested in Mariners duo
While the Cubs are focused on upgrading their bullpen, they aren't completely shying away from adding to their rotation as well. As Jeff Todd of MLB Trade Rumors writes, Chicago has shown interest in acquiring either James Paxton or Taijuan Walker from the Mariners:

The Cubs remain on the periphery of the starting pitching market but are suggesting to other organizations that they don’t expect to land a starter. Certainly, it seems, Chicago won’t burn up too much prospect capital just for a back-end hurler. That’s not surprise, as the Cubs have a perfectly sturdy starting five as well as some depth options.

That’s not to say that the Cubs aren’t still poking around, with Heyman noting that the team spoke to the Mariners about James Paxton and Taijuan Walker. Other organizations have as well, including the Rangers. A Seattle source tells Heyman that a trade of either young starter remains unlikely, though the team isn’t taking anything off the table at this point. From where I sit, it’s tough to imagine either player changing hands; Seattle will surely want to see whether Paxton can harness his improving stuff, while Walker isn’t at full health.

Cubs interested in Josh Reddick?
The Cubs are reportedly focused more on bullpen help, but they are checking out outfielders as well.

Sources: #Cubs are looking at Josh Reddick. Bat coming around after missing nearly 6 weeks with fractured thumb. Theo drafted him in Boston.

The ties between Theo Epstein and the Oakland Athletics outfielder are important. This might be a depth play for the Cubs, as Jorge Soler, Dexter Fowler, Kyle Schwarber and Chris Coghlan are all on the disabled list. But once those players return, there could be a log-jam in the outfield. Expect the A's to move Reddick since he's a pending free agent and the A's are not in the postseason hunt.

Follow our Chicago Cubs news page for all the latest Cubs trade rumors!