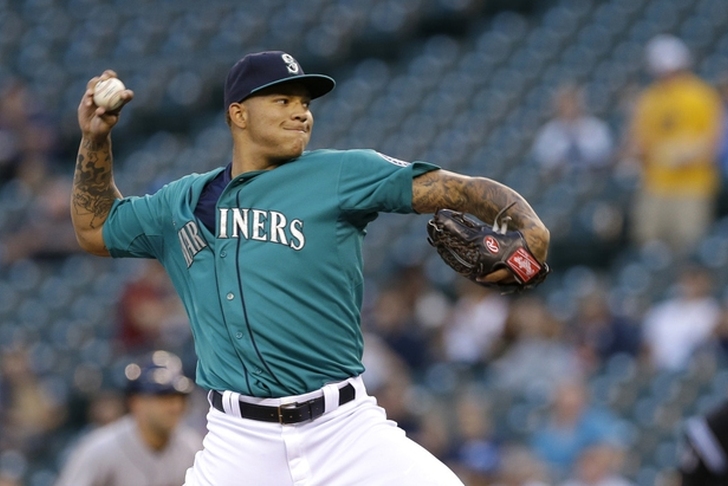 The MLB trade deadline on August 1st is rapidly approaching and the trade rumors around the Chicago Cubs are starting to heat up. The Cubs are 60-40 and lead the NL Central. They've already pulled off the biggest trade so far this season, landing Aroldis Chapman from the Yankees. However, the Cubs could look to make another deal or two before the deadline. With that in mind, here all the latest Cubs trade rumors.

Chicago Wants Taijuan Walker Or James Paxton?
The Cubs have already landed their closer, but are looking into adding another starting pitcher. Jon Heyman reports the Cubs called the Seattle Mariners about starter Taijuan Walker and James Paxton. The 21-year-old Walker is currently hurt, but has a bright future. He's 4-7 with a 3.66 ERA this year. Paxton's ERA has jumped to 4.27 (it was 3.90 last year), but he's still 24 years old. Both players are young and controllable for several more years, which is what the Cubs are looking for if they trade for a starter. However, Heyman reports the Mariners are unlikely to deal either.

Cubs Trying To Add An Outfielder?
The Cubs have Jason Heyward and the now-healthy Dexter Fowler in the outfield, but Jorge Soler is on the disabled list and Kyle Schwarber isn't coming back this year. Plus, Soler and Heyward have struggled at the plate this season. Because of that, Jon Morosi reports the Cubs are looking at adding a bat.

The Cubs have had talks with the Oakland A's about right fielder Josh Reddick, according to sources. Along with Cincinnati's Jay Bruce and Colorado's Carlos Gonzalez, Reddick is on a short list of prominent outfield bats who could be dealt prior to Monday's non-waiver Trade Deadline.

Reddick has been linked to the Cubs before, since baseball czar Theo Epstein drafted him in Boston. Bruce is likely to be dealt by the Reds, although the same might not be true of Car Go. If the Cubs do make a deal for a bigger name in the outfield, adding a rental in Reddick makes the most sense.