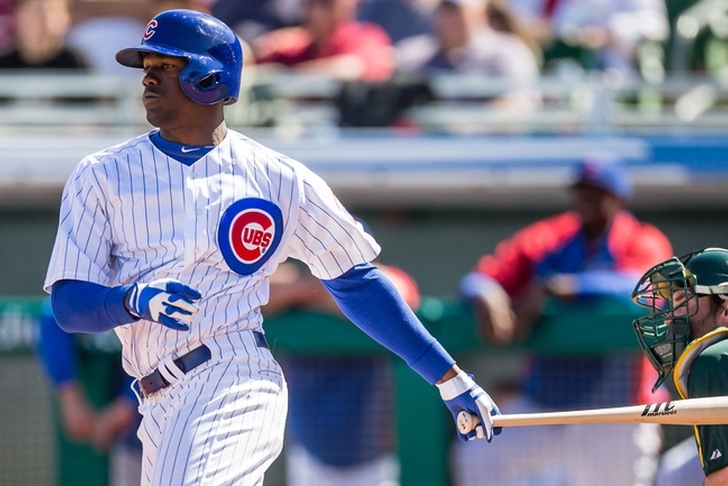 The Chicago Cubs are poised to be one of the most active teams on both the trade and free agent markets this offseason, with a litany of rumors swirling about their intentions as November rolls on. We're here to bring you the biggest potential stories from the world of Hot Stove speculation with the latest edition of our Cubs Rumors Roundup.

According to FOX Sports' Ken Rosenthal, the Chicago Cubs will "at least explore the trade interest they're getting" in right fielder Jorge Soler and infielder Javier Baez. Rosenthal adds that such a move would likely be for a top-upside pitcher of "similar age, service and talent."

Such a move would make sense, considering that the only way to really keep from overloading the rotation with arms north of 30 is to pry a younger impact pitcher away from a team. Although infielder Starlin Castro has also been rumored to be on the trade block, his value has depreciated enough where the team wouldn't be able to command the same kind of return as they would for either Baez or Soler.

Free agent ace David Price still prefers the Chicago Cubs as his next destination, according to several sources with knowledge of Price's thinking.. However, Ken Rosenthal points out that the Boston Red Sox are a team that could potentially swoop in on such an arrangement, upping the Cubs' best offer by something in the neighborhood of "$30 million" to entice Price to make the move to Fenway.

"(Boston Red Sox GM Dave) Dombrowski, by all accounts, is quite fond of Price, and presumably is authorized to spend on an ace in a way that his predecessor, Ben Cherington, could not (remember, the Sox probably could have extended Jon Lester for $125 million or so before he hit free agency)."

The Red Sox remain low on Price's priority list due to some lingering issues from his time with the Tampa Bay Rays, but they're at least a force to be reckoned with if an all-out bidding war takes place.