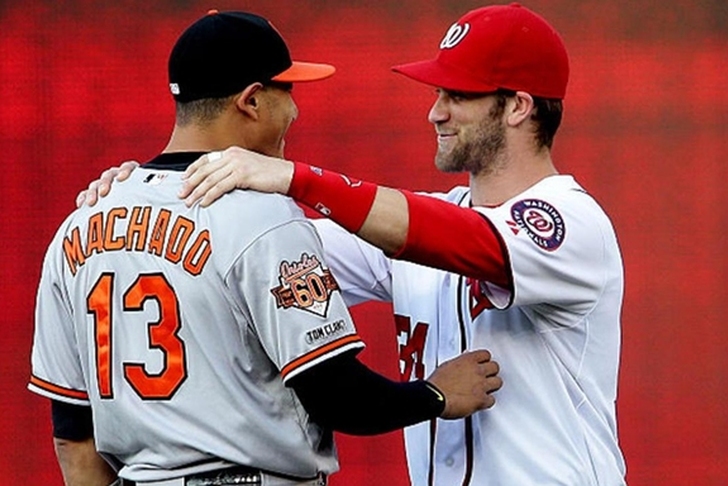 The MLB season is a few months away with spring training right around the corner and the offseason rumor mill is heating up. The rumor mill is heating up for the Chicago Cubs, who are rumored to land some of the biggest names in baseball. Following the Cubs first World Series victory since 1908, Chicago finished the 2017 season with a 92-70 record, winning the NL Central. However, they lost to the Los Angeles Dodgers in five games in the NLCS, which has motivated the team to search this offseason for pieces to help them fly the flag once again in 2018.

Here are the top rumors surrounding the Cubs that you need to know:

Manny Machado Possibility
The Baltimore Orioles have slowed down their eagerness to trade third baseman, Manny Machado. Robert Murray of FanRag Sports says the Cubs and Boston Red Sox are the most likely to land the young star, but the Cubs have the advantage over the Red Sox because of middle infielder Addison Russell.

“I think the Cubs would be willing to move Russell along with other pieces to make Manny their everyday shortstop of the future,”

Machado is a free agent at the end of 2018 and will likely seek a contract worth more than $300 million on the open market. The Cubs are one of the few MLB teams that have the money, so will they pull the trigger and land the 25-year-old Machado next offseason?

Bryce Harper Realistic?
The Washington Nationals are still hoping to re-sign their young star Bryce Harper, but he is going to see what type of offers come across his plate in free agency next offseason. Harper will likely be looking for a possible record-setting contract around $500 million, which dwarfs Giancarlo Stanton's record $325 million contract.

An obstacle in the way for Chicago signing Harper is current Cubs outfielder Jason Heyward's contract. Heyward is a five-time gold glove winner and is under the team's control until 2023. He also holds partial no-trade clauses in 2019 and 2020 and full no-trade clauses from 2021 to 2023.

Harper is 25 years old, with a career batting average of .285 with 150 home runs in 768 games and is hands down a better player than Heyward. But due to Heyward's contract, it may not be possible for the Cubs to have both of them on their roster.

Replacing Jake Arrieta
The Cubs talks with starting pitcher Jake Arrieta are silent at the moment, which is why they are looking to improve their starting rotation this offseason. The Cubs already added pitcher Tyler Chatwood to a three-year contract, which should help replace the innings that veteran John Lackey leaves behind.

Arrieta's agent Scott Boras has made it public that he wants Arrieta to get around six years and $160 million. Will the Cubs be able to give Arrieta the contract he wants? Some moves the team is making suggest they are possibly moving on from him.

On Dec. 18, Cubs executives Jed Hoyer and Theo Epstein met with free agent pitcher Yu Darvish. According to CBS Chicago, Darvish is the Cubs top priority at this point. With both Darvish and Arrieta looking for contracts with at least five years, it appears Chicago may have to choose between one or the other.