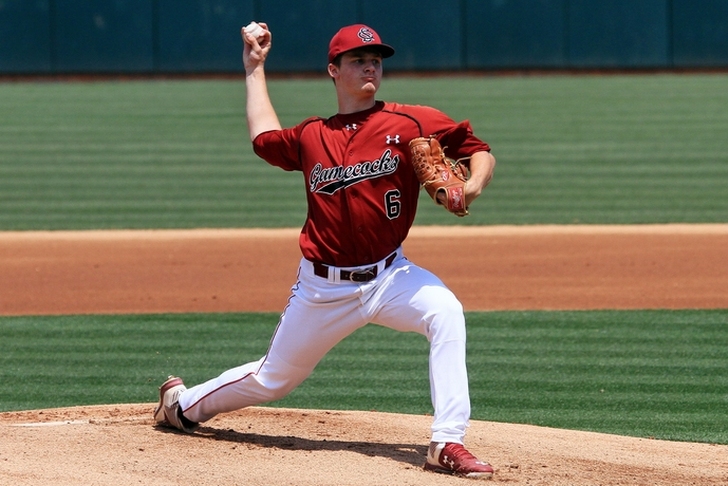 The 2017 MLB Draft is Monday and the Chicago Cubs hold the No. 27 (and No. 30) pick this year. With the draft just days away, the rumor mill is abuzz with prospects the Cubs could select in round one. The Cubs could go several different directions, and having two picks in the top 30 (one as a result of losing Dexter Fowler) gives them the option to go two different routes if the want. Some of the more common options are below, though several players not listed could be the selection, with the focus on what could happen at No. 27. Some of the latest rumored picks are below, with some notes on each player, are below.

RHP Clarke Schmidt (South Carolina)
There's a common theme for all these selections: pitching. The Cubs are expected to target pitching with at least one of their two top 30 picks, so we're hedging the bet by going pitching heavy. Purely based on his talent and what he did at South Carolina this year, Schmidt is a sure-fire first rounder. But, he underwent Tommy John surgery in April and that will hurt his draft stock. The Cubs could take the risk on him late in the first round, as Baseball America suggests. He could be a mid-rotation type, or a key bullpen arm

RHP Sam Carlson (High School, Minnesota)
Here's yet another pitcher, with CBS Sports mocking this pick. Carlson could be first high school pitcher from Minnesota to be drafted in the first round. He's committed to the Florida Gators and it might take mid-first round bonus money to get him to sign, which is doable for the Cubs. He's grown and upped his velocity over the last year, which has helped make him into a first round pick. He could be off the board before the Cubs get a chance to take him, however.

RHP Tanner Houck (Missouri)
Here's one more pitching option for the Cubs, one MLB.com is projecting. Houck has hit the mid-to-upper 90s on his fastball, but his velocity has dropped lately. There was some top-10 buzz at the start of the year, but he's now slid into the mid-to-late first. Houck might not last, but the Cubs would likely snag him if he did. Worries about his durability could result in him settling into a relief roll.

Check out our Chicago Cubs team page for all the latest Cubs draft rumors or download the Chat Sports App!