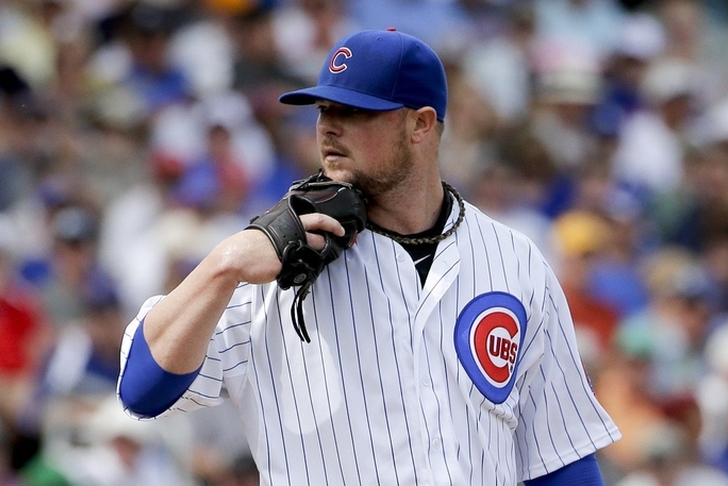 The Chicago Cubs fell short of returning to the World Series, but have high hopes of returning in 2018. The Cubs have had a relatively quiet offseason, but are stirring up the headlines with some recent news today. The Cubs announced their opening day pitcher and two important Cubs position players were out of Monday's Cactus League lineup. Here are your latest Cubs news and rumors you can't miss:

If you are a true Cubs fan that throws back opponent home runs at Wrigley, then you should Like and Follow Cubs HQ by Chat Sports

Jon Lester Will Start On Opening Day
Who will start opening day for the Cubs against the Miami Marlins on March 29? Cubs manager Joe Madden announced today that Lester will be the opening day starter for Chicago, according to Cubs beat writer Gordon Wittenmyer.

Despite having a disappointing season in 2017, the Cubs are confident Lester can rebound after a season where he went 13-8 with a 4.33 ERA over 32 starts last season.

Kris Bryant Out Monday
The 2016 NL MVP missed Monday's Cactus League game? Yes, but don't worry Cubs fans there is no reason to panic. According to Cubs beat writer Mark Gonzales, Kris Bryant is out of the team's lineup due to an illness.

The illness seems like merely just a cold that will keep Bryant out for only a day or two. Filling in for Bryant at third base was left-handed hitter Jason Vosler. The 24-year-old is a career .246 hitter in the minors since being drafted in the 16th round by the Cubs in 2014.

Ben Zobrist Could Be Ready In A Week
Ben Zobrist has been dealing with a back issue that flared up on February 19th, but it wasn't considered anything to worry about. Over a week later and it's still a lingering issue for the Cubs second baseman. According to MLB.com beat writer Carrie Muskat, Zobrist is day to day and could be ready to play in games in a week.

The veteran utility man dealt with a back issue early last season so there's no sense in pushing him back quick.

Zobrist had a disappointing season in 2017 which may be the result of a lingering back injury. He batted .232 with 12 home runs and 50 RBIs last season. His batting average hasn't been under .235 since 2007. Hopefully, a healthy Zobrist will help the Cubs get back to the World Series in 2018.