The Chicago Cubs and the Jeff Samardzija Conundrum 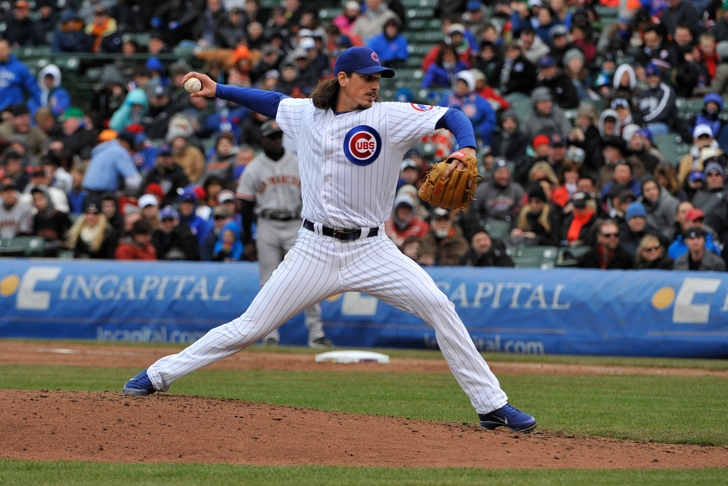 Jeff Samardzija has been nothing short of stellar this season. Don’t be fooled by his 0-3

record, as that's much more indicative of a lack of run support (1.96 runs per game) than anything he's doing wrong.

Samardzija has posted a 1.62 ERA through seven starts (the second-best mark in baseball), and has gone at least seven innings in six of seven games.

A closer look at his game-by-game log shows just how impressive he's been so far.

He pitched seven shutout innings on Opening Day, but the Cubs scored zero runs and lost in extra innings.

He gave up two earned runs while striking out eight in his next outing over seven innings. Once again, the Cubs put up a goose egg. He got his first loss of the year.

He gave up one earned run at St. Louis in his third start, getting a no decision.

Next time out? Same story. Seven innings pitched, one earned run. One run of support. Add another tally to the loss column.

April 23 vs. the Diamonbacks? 7.1 innings pitched. 2 earned runs. No decision.

He struggled slightly in his next outing, giving up three earned runs over 5.2 innings. Still, a team’s offense should be able to post more than three runs on any given night. The Cubs posted just two.

He twirled his best game in his first May outing, pitching nine innings, giving up no earned runs and fanning seven. The Cubs lost 3-1 in extra innings.

Needless to say, Samardzija is pitching like an ace. On a contending team, he would have five, six or maybe even seven wins by now. The Cubs hope to contend within the next several seasons. Samardzija will provide a solid ace at the front end of the rotation…right?

Samardzija is arbitration-eligible in 2015 and will be a free agent in 2016.

Many “baseball experts” say the Cubs have two options, both of which have impending deadlines: trade him or re-sign him.

Both options have merit. Samardzija would be a heavily sought on the open market, and the Cubs would have their pick of trade offers. The 2015 pitching free agent class is thin, with Max Scherzer and James Shields headlining but little else. Samardzija would likely net a bountiful return–a top prospect, at the very least. Theo Epstein has shown an affinity for stockpiling talent, and he would have plenty of options to choose from if Samardzija is dealt.

Then, there's the other option–one that, in my mind, makes more sense.

The Cubs have a plethora of offensive talent waiting in the wings–Javier Baez, Kris Bryant and Albert Almora, just to name a few. However, they lack pitching depth. While they have a few potential pieces, those arms won’t be ready for several years. Meanwhile, there is an ace arm right in front of the organization.

Sure, it would be pricey. He would be asking for serious money, and rightfully so. Samardzija has proven himself as a top-notch player in today’s game. A comparable contract would likely be Homer Bailey's – six years, $105 million. Statistically, the two pitchers are similar, and with Samardzija’s stellar performance thus far in 2014, he could conceivably ask for more.

Regardless of the cost, and whether or not it goes against Epstein’s “perfect image” for how this rebuild is going to go, it would be a beneficial move. The reward would be three-fold: One, the team locks up a bonafide ace for the near future. Two, you lock in an additional piece for when the “kids” come up and the team is consistently competitive. Three, the move would make a statement, both to the fan base and to the rest of baseball, that the Cubs are in this for real.

Theo needs to get it done.