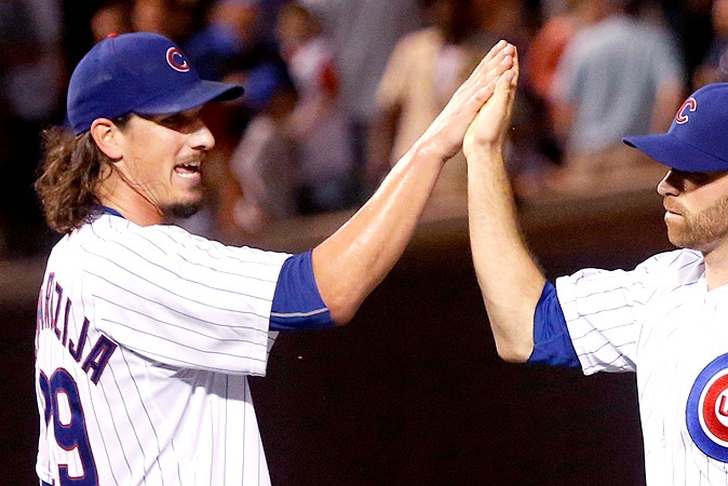 It's an NL Central showdown starting on Monday, as the Chicago Cubs welcome in the Cincinnati Reds for a three-game series.

The Reds are winners of five of their last seven and find themselves just three games behind St. Louis for the second Wild Card in the National League.

Despite losing their last two against the Pirates this past weekend, the Cubs are 11-9 in the month of June. That's a far cry from the 20-33 record they posted over the first two months of the 2014 MLB season.

That's how many times Cubs starting pitcher Jeff Samardzija has held opposing teams to zero earned runs this season without picking up a decision.

After providing the go-ahead home run in the Reds' 4-3 series-clinching victory over the Blue Jays on Sunday, Cincinnati Reds third baseman wasn't shy in talking about his individual future this summer.

Without question, he's hoping he's selected to represent the NL and the Reds in the All-Star Game.

"I think that would be awesome. Some guys don't like to talk about it,' said Frazier, via Mark Sheldon of MLB.com. "If you want to be a Major Leaguer, one of your goals every year is to be an All-Star. There are no jinxes or nothing about it, you do. I think it's something to be proud of. Maybe one day it will happen, hopefully this year. That would be great."

Frazier is currently not among the leaders in NL voting at third base, but his 17 home runs and 44 RBIs could make him an attractive candidate to be selected as a reserve after voting concludes.

If there's any consolation for Chicago Cubs fans during a tough year for the club, it may be the fact that the Cubs are this close to turning wins into losses.

How close? Well, the Cubs own MLB's second-worst record in one-run games at 7-13, losing most of those games due to a lack of a clutch hit or two.

Per ESPN's expected win-loss stat, the Cubs carry all the markings of a 35-38 team, despite coming into Monday's action in the cellar of the NL Central at 31-42.

If the Cubs can string together a couple more hits here and there, they very well could pull out of their funk as the season progresses. However, that's a big if the way things have gone so far.

Samardzija's bad luck when it comes to picking up wins has been well-documented, with his last start in Miami on June 17th was no exception. Despite going six innings without giving up an earned run, the Cubs lost 6-5.

Alfredo Simon hasn't had to worry about all that. He's won each of his last four starts despite giving up three earned runs in three of those contests.

What They're Saying About the Reds:

What They're Saying About the Cubs:

Cubs' Luis Valbuena has been wonderful this season (Cubbies Crib)