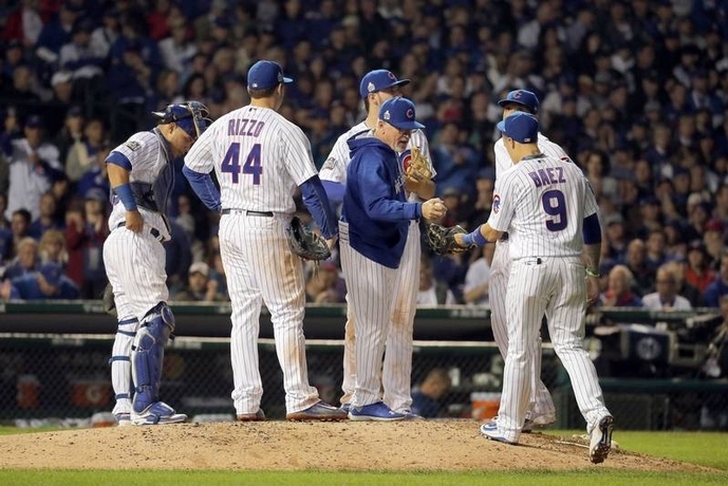 The Chicago Cubs are World Series champions, and as you would expect, fans are elated with just this one championship, ending the franchise's 108-year drought. However, this team has all the makings of a dynasty that will bring multiple rings to Wrigley Field - including next season. Here are four reasons why the Cubs are the favorites to repeat as World Series champs in 2017:

4) The pressure is off
Ever since they lost to the Mets in the NLCS in 2015, this was was supposed to be THE season the Cubs broke the curse. They not only had to deal with pressure of being championship favorite, but they had the added pressure of the 108-year curse and being that special team that ended it. With that accomplished, the pressure is completely off of this group. Sure, they're expected to win multiple championships (which is why there's this article), but if they don't? They will always the the team that broke the curse. Now they can play more free - which will only lead to more wins.

3) Experience
Another thing this championship does is change the narrative surrounding this team from "a bunch of young guys" to "guys who know how to get it done." And there's something to be said for that. Not only did this team show resolve by coming back from a 3-1 deficit, but also showed incredible fortitude by finding a way to win Game 7 after giving up a 5-1 lead. As a team, you can believe you are capable of overcoming anything, but when you've actually done it? That's an entirely different story.

2) Their players are still improving!
Here's a scary thought: Anthony Rizzo, Kris Bryant, Addison Russell, Javier Baez, Willson Contreras and Dexter Fowler are no where near the start of their primes yet. That means all of those major contributors are still improving and will be even better next season. This lineup is already extremely strong - and they're shaping up to be a juggernaut.

1) Who is going to stop them?
Really, there isn't anyone in the National League that can really provide a tough test for this team. The Dodgers are team of aging veterans, the Nationals always implode in the playoffs, and the Giants lack the talent level they've had in years past. The same can be said of the Cardinals and Pirates, who are both expected to take a step back next year, and who knows what the Mets will be.

As for who Chicago could face in next year's World Series, the Indians are favored to get back, and the Cubs just beat them without a healthy Schwarber. The path is certainly there for a Cubs repeat.