3 Reasons Why The Cubs WILL Win The World Series 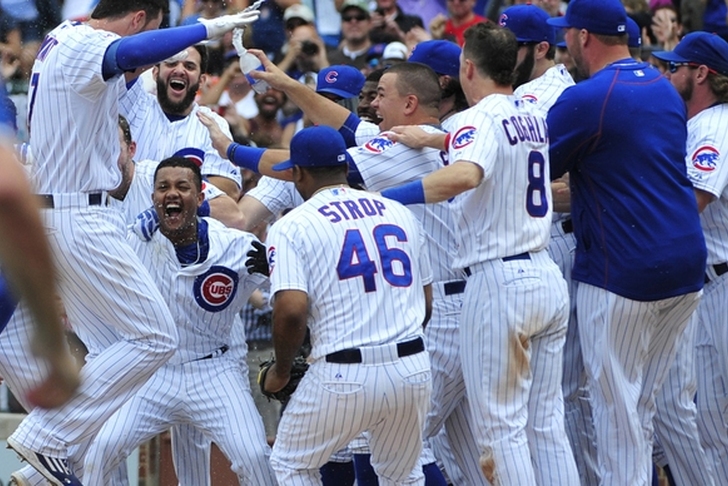 The Chicago Cubs have a daunting task ahead of them when they take on the New York Mets in this year's NLCS. However, we're not worried -- not in the slightest. In fact, we're not worried about any matchup the Cubs face from here on out. Here's 3 Reasons Why The Cubs WILL Win The World Series.

3. Awesomeness At The Corners

Anthony Rizzo at first. Kris Bryant at third. There is no better corner combo in all of the Majors than the Cubs' young, marquee-lighting duo. They're SO good, they're young and they've injected an optimism into the Cubs fan base I haven't personally seen in my lifetime. Both guys are set to go from talented kids to outsized folk heroes by the end of this postseason. We're banking on it.

Jon Lester has the name -- and he's a fine name to have in your rotation -- but Jake Arrieta is going to win the Madison Bumgarner Award in 2015. Why, you ask?

Via Patrick Mooney of CSN Chicago:

"According to the Elias Sports Bureau, Arrieta became the fifth pitcher to notch at least 22 wins – with no more than six losses and an ERA below 2.00 – since the earned run became an official stat in 1913. The others were unanimous Cy Young Award winners during those seasons: Sandy Koufax (1963), Denny McLain (1968), Ron Guidry (1978) and Dwight Gooden (1985)."

He's on the level of Koufax and peak Gooden, folks. He's the right man at the right time to pitch this team to a title.

Remember the way the world tilted off its axis when the Boston Red Sox finally broke through in 2004 with their first World Series title in 86 years. Multiply the joy by three (because c'mon, who's outside of Massachusetts is rooting for a team from Boston?), and you'll be close to the emotional fireworks that'll be set off when the Cubs shake off their 107-year blues. It's simply time. After watching Joe Maddon manage this team all year, there's no doubt in my mind that something special is coming.

I can just feel it, ya know?

Follow our Chicago Cubs page for all the latest Cubs news and rumors!