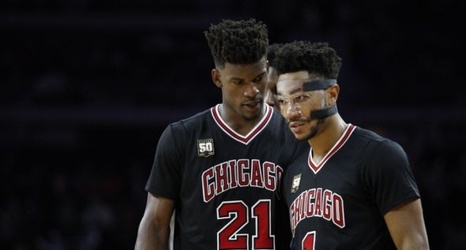 There were two Chicagoans playing in last night’s game at the United Center featuring the Chicago Bulls and Milwaukee Bucks in Derrick Rose and Jabari Parker, but it was Jimmy Butler who stole the show. And this was one game after he dropped 42 points against the Toronto Raptors with 40 of those points coming in the second half. That was a franchise record, by the way, which Jimmy took from someone you might have heard of named Michael Jordan.

Butler finished with 32 points versus Milwaukee and tied his career high with 10 assists in the 117-106 victory, but it is Rose who deserves credit for handing over the reigns of the bulls to their hot swingman.